The attraction of female monasteries

Details
Written by Marlies Bosch
06 May 2008

In the streets of Leh, the capital of Ladakh, you will see a striking number of older Western women. They seek the silence and depth at this spot, at the foot of the Himalayas. Ladakh was once part of Tibet, a Buddhist state, which are beautiful ancient monasteries, attract many visitors. 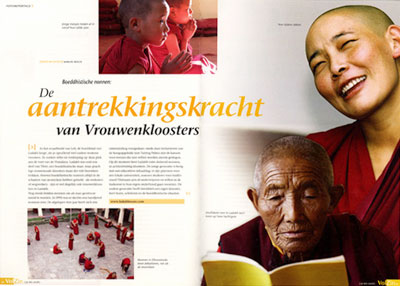 It is virtually unknown that in Ladakh Monasteries are also women. Nuns have historical circumstances always in the shadow of monks lived, as workers and road workers. Still praying nuns to be reincarnated as a man. In 1995 there was only a handful of nuns. The last decade has been a revolution: thanks to initiatives of a nun with high education, Dr. Tsering Palmo, the chances for girls who want to become non soared.

Currently has over 1000 nuns Ladakh in 28 monasteries, whose younger generation is busy with an educational catch-up. There are plans for a local university, studying traditional Tibetan nuns doctor or teacher and want in the future to provide for themselves. The older generation now has its own monastery, teaches reading, writing and Buddhist rituals.

We can learn from them what it's like to live in the present and meditate.

Volzin is a newsmagazine for religion and society.

We have 76 guests online