On October 21, 2007 there was another Ladakh Festival, this time in Nijmegen. We see that the spread of the festivals across the country is getting rid of a huge audience. 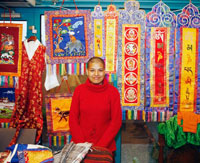 Coincidentally during the same period there was a group of nuns from Nepal to visit the Netherlands. She toured Europe with their songs, dances and rituals, which they wanted to generate money to build a new temple to their growing faster every monastery. Even nuns from Ladakh to this particular study higher education for nuns in Kathmandu. We have combined their visit to our Festival. 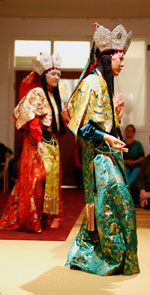 On October 20 the nuns showed their rituals in the Jewel Heart Buddhist Centre, where we would hold the festival next day. The hall was full, both days, and the proceeds were for both the Nepalese and the nuns DFLN enormous. They sold for over  1500 brought to their Tibetan art, and DFLN to  2500.00 over the next day. 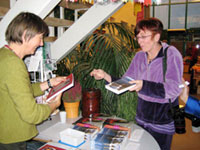 Besides the workshops and lectures, there was a short version of a movie shown during the next festival Goirle will be shown in its entirety, "Autumn in the Himalayas" by Malgorzata Skiba.

During this festival there was also focus on the work volunteers can do in Ladakh this summer, as the guesthouse will be opened. There was much interest. Aniek Jaartsveld and Joan Mooney told about their own experiences in recent years in Ladakh, and those stories were so inspiring that in the meantime quite a few people have reported interested in volunteering in Ladakh.

pictures of the festival

We have 330 guests online