Marlies Bosch, secretary of the Dutch Foundation for Ladakhi Nuns, received the Royal Award from the Mayor of Zuidhorn, Mr. Swart on Friday, April 26, 2013.

She was completely surprised with the appointment as Knight in the Order of Orange-Nassau . Marlies, officially Mrs M.E. C. C. Bosch, received the award for her efforts in the field of welfare and care, cultural, humanitarian services and contribution to the church. 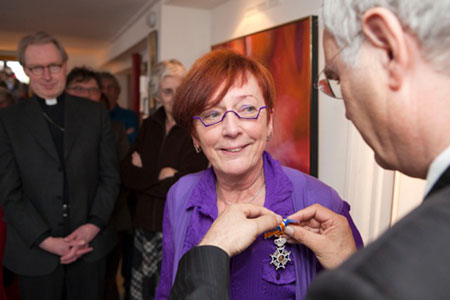 Marlies Bosch (1942) is a photographer and journalist who specializes in issues around women and health. In addition to her work for the DFLN, where she is one of the founding member, she has also given training to women and workers in the Netherlands, America and the former Yugoslavia.

She encourages women to become aware of their own power and to take control of their lives and health into their own hands.

Also as the editor and photographer of the Diocese of Groningen-Leeuwarden she has earned much acclaim.

We have 253 guests online