Since last autumn five girls are living in Nyerma they go to Lamdon school in Thiksey. Initially they were dressed up as other children but soon they decided in consultation with their parents that they would wear nuns clothes. The financial advantage is that they save on school uniforms.

I regularly discuss with abbess Dechen that they are children and need time to play. She agrees with me but on the view of how often and how long we have a difference of opinion. Because emphasis on homework and academic achievement is a criteria in many families in Ladakh I know it is not specific to this situation. The young nuns have their tasks such as fetching water from the pump and helping in the vegetable garden. That is no different from other children in Ladakh . However additionally from normal kids the young nuns pray half hour before eating in the prayer room. Plus three of the five need extra attention due to their health problems. 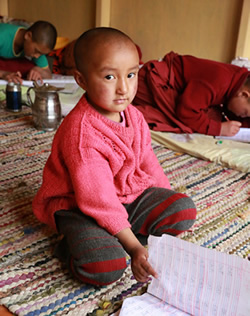 The youngest, Karma, is six but she looks very small even for a Ladakhi child, almost as a 1 or 3 year old kid. She comes from a family where she and other siblings are neglected and not well fed. She has crooked legs and that is beyond repair. Initially she barely spoke and communicated. Fortunately there is improvement in the recent months thanks to Chamba and Dechen. According to Dechen and Chamba, Karma does not do her best with homework. I try to explain that she is still very young and that concentration is difficult, that she has a disadvantage and that not all children have the capacity to learn.

Dolma is around thirteen or fourteen years old. In her early childhood she had an infection in her hip joint, which caused a deformity making her limp. I was with Dolma and Chamba at the hospital to review it, an x-ray of the hip joint was made to assess the situation. The doctor recommended an increase in sole of her shoe to limit the scoliosis. The doctor invited us to come the next day for a free consultation with an orthopedist from Amritsar. The specialist told us that for the hip joint there was no further treatment or operations that could help but that he could perform a leg extension over two or three years. That is easier said than done. The operation itself takes less than two hours, but the whole process takes months (in Amritsar) to complete.

The oldest Karma is (approximately) thirteen years. She was born with a club foot which as a child she has been operated on. Then was diagnosed with bone TB. She underwent an operation in which a piece of bone was removed. Now a wound (not the surgery wound) in her ankle is inflamed. Dechen says that if the TB spreads over time it will be necessary to amputate the lower leg.

Ina Prince ( volunteer Nyerma and nurse) and I are in the Netherlands for more information . Dechen will do the same in Ladakh. 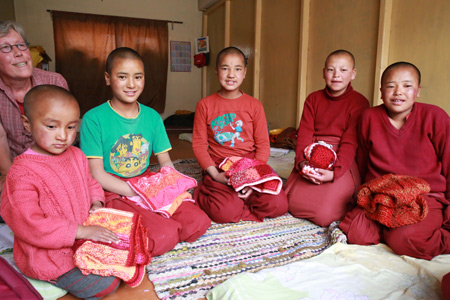 With all three girls Dechen and Chamba go to a (foreign) doctor who has a practice in Mahabodi. Why ?

A visit to the hospital in Leh is an experience in itself. You start by paying two Rupees 'entrance fee'. Then I watched dumbfounded as Chamba struggles with Karma among the waiting crowd Dolma and me follow in the aftermath. People were hanging everywhere. Chamba knocks on the treatment room, waving some papers and we were allowed inside. Later she told us that the papers were the details of the operation of Karma and that it had nothing to do with the consultation now. The difference was it definitely saved us half a day wait.

They took an X-ray (cost 60 rupees each) of the wound Karma had, then cleaned and redressed it . This happened in a treatment room where at the same time an Austrian lady who had broken her wrist and a man with a wound to his foot was treated with a cast. Dolma went completely white and stepped out during Karma’s treatment. I went outside with her but felt there was much to observe.

The next day I went back with Dolma for the visit to the orthopedist. Although we were there in time we were # 44 on the waiting list. This time Chamba had no tricks to speed up the case. We were expecting a long day, waiting. After the hospital administrators and other big-shots had finished their greetings and tea they called us in, into a big hall where important people sat on one side, and many others stood waiting, there was a small corner for treatment separated by a cloth. I was seated next to the board members and was also offered tea. Having taken stock our turn came first. Not fair that a Western face gets preference. But nice for us that we did not have to wait a whole day.

We have 311 guests online