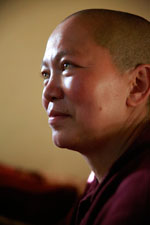 After a lot of tension, numerous regulation and consultation came the heartening message that Dechen had received a visa for her visit to the Netherlands.

On a grey Wednesday morning we were with a small committee at Schiphol to welcome her. During the ride to the east of the country, she noticed that it remains green in the winter. The excellent condition of our roads caught her immediate attention, in India such a long car ride would have been full of bumps and potholes.

It was very nice to see our own house, country and customs through the eyes of Dechen: how a coffee machine, a cheese slicer and a dishwasher work. An automatic car wash was magical. When the garbage truck comes to empty the containers, she interrupts her prayer to take a picture. Nuns from Ladakh also use modern techniques; instead of carrying her heavy prayer books, someone downloaded it for her on the smart phone.

Dechen was keen to experience, taste and discover everything: she shopped for groceries by herself at the supermarket, tasting everything that was offered to her. She likes everything, except sauerkraut, so that's why she is a wonderful guest to have at the table. Cheese was by far her favorite food.

In Amsterdam Dechen was very impressed with the Anne Frank house. Madame Taussaud with the wax statues of Dalai Lama, Gandhi and Nelson Mandela of which she took many photos. A walk across the red-light district made her very sad, to realize that prostitution occurs all over the world. A visit to the Delta Works in Zeeland was one of the highlights that she invariably lists first when asked what impressed her the most. She finds it a marvel of technology. The boat to Schiermonnikoog was also a special experience: such different nature than in Ladakh.

The Ladakh festival in Zutphen was another highlight. Dechen was pleasantly surprised that there were so many acquaintances. She expressed her gratitude to the DFLN and put the directors in the limelight. Also the sponsors, without whose support the DFLN cannot do its work, were much appreciated.

After the festival, Dechen went to Barcelona for a few days, to visit a friend she has known for a while. She was impressed by the Sagrada Familia, but the atmosphere of the Benedictine Monastery in Montserrat moved her so much that, she spontaneously prayed out loud by the statue of the Virgin, causing people to gather around her and join her in a mummer.

When people asks her view of the Netherlands, she says that everything is orgainsed and in order here. It is very positive that buildings and things are being maintained well. She has gained a lot of new experiences in a society that is very different from hers. She absorbed everything without making a judgment: if this is customary here, then that is good. What she cannot understand, however, is that babies and toddlers sleep in their own bed in their own room and not with the (grand) parents. She feels that expresses less love.

In the course of her stay people repeatedly asked her if she would like to stay in the Netherlands because of all the luxury. But she firmly believes that Nyerma and the nuns, and Chuchot and her family is the place where she belongs. And of that she is rightfully proud!

We have 364 guests online