What course is hard and not (yet) advance: Prayer Mill for Nyerma

A Ladakhi father told his daughter a mystery. "It is hard but does not advance. What is that? " It turned out to be a turning millstone that grinds barley into flour. The prayer wheels spinning in Ladakh also around without moving, but what is inside you, puts great distances and will benefit all living beings. Anyone who thinks the Tibetan Buddhism, which is part of the daily life of the nuns in Ladakh and many others, think of prayer flags. They flutter in monasteries, temples, mountain passes and on the roofs of people's homes. They are printed with holy spells and wind along the stroke, carries good wishes to the world. Equally important are the prayer wheels. They come in many sizes and are hand movement, wind or water power into motion. The little ones are for personal use, they have a wooden handle and can be used while sitting or walking. The larger version, mounted on a fixed vertical axis, is often placed on a route that leads to a temple or monastery. Passers-by, the prayer wheel (s) manually run.

Whatever the size of a prayer wheel is, the principle remains the same. The cylinder is just the shell, the key lies inside, there are just like the prayer flags sacred texts. The mills are in the hands of the clockwise and rotated with each rotation, the many prayers and good wishes sent into the world. The energy of the mantras are distributed and will not only benefit the person making the prayer wheel, but to all those on whom descend blessings. Actually each a monastery prayer wheel adorn the landscape.

The Dutch Foundation for Ladakhi Nuns has for many years especially educational projects for the nuns in Ladakh. There is not a prayer wheel. We want to make an exception for a project by two DFLN sponsors put into operation. Anneke van der Heiden and Ellen ran pools along with Marike Walk to raise money for a prayer wheel for the nuns of Nyerma. The prayer wheel is between the monastery and the nearby Nyerma by villagers built a new temple to stand. He does not just benefit the old nuns, but the whole village community. In addition, the project is part of the cultural preservation in this area which for centuries regarded as sacred place for religious instruction and meditation. Ten centuries ago, here: the first monastic university of Ladakh. The ruins and stupas are still surrounding the monastery Nyerma. The initiative of Anne and Ellen is completed in a special way. One of our supporters decided to DFLN to include in her will. Her last words were about that decision: "Now I can watch over the nuns from enjoying what I gave them." The DFLN devote part of this donation to the prayer wheel.

However, there is not enough money to complete the project. That's why we ask everyone to an additional contribution through this special project a step closer to home: routing number 390100560 of DFLN, Boornbergum, stating "Prayer Nyerma Mill.

On behalf of all the nuns Nyerma: thank you so much! 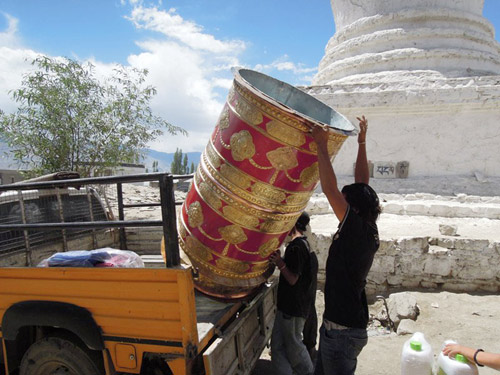