Still in a daze I am sitting with my cup of tea... Aniek just arrived... The Dalai Lama is now in Leh, but will most likely arrive around 11am at the new convent of nuns in Basgo, which is due to be inaugurated on 4 August. Imagine! Dalai Lama’s first visit to a NUNNERY!

And... you learn that nothing in this world is for certain.

Full of anticipation we had arranged a taxi to take us to the 45 km away Gephel Shadrubling monastery of the nuns. There was already a huge buzz, everything was decorated, a dirt road was constructed and a water truck was used to make it presentable, the convent looked really beautiful, those girls did a great job with a lot of help from villagers. Villagers had the entrance adorned with flowers, in short, everything was set to receive the Dalai Lama ... 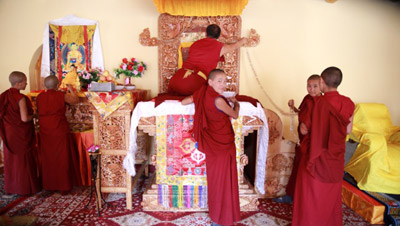 We saw waves of people who walked from the monastery to the road and back. Many hotshots who were in contact with the vehicle of the Dalai Lama gave changing information: 80 % chance that he will arrive or no, not yet confirmed. Meanwhile, people along the road grew to a true mass, beautifully dressed, women with traditional hairstyle and clothes which alone was worth being here as it is not often that you experience these unique traditions.

The nuns were super nervous, the Dalai Lama for the first time in a nunnery in Ladakh! Meanwhile, we were told that the people along the road (thru which barely a bus or car could pass), most certainly were summoned to stand along the driveway of the monastery.
Eventually, it was almost half past two, standing in the blazing sun, we saw a column of cars arrive, a wave of excitement ran through the crowd, the cars stopped.... stood still , and then drove slowly by. You could feel the disappointment flow through the crowd almost as if everyone will burst into tears.

But the nuns invited everyone to come to the monastery Dechen gave a beautiful explanation to the people who were on edge, the first time I saw a nun speak with conviction to a large group of people. 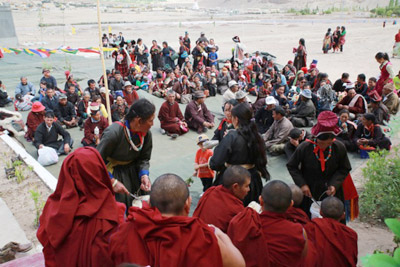 She explained that the people should not be sad, that he will try to come again in about two days, and perhaps that would be a success, and after everyone had something to eat, a few men began spontaneously to play their drums and a group of men and women who were already in the traditional costume, began a Ladakhi dance.

The lesson from this experience is: do not expect anything and be prepared for what is thrown at you unexpectedly. In any case, in the past few months the nuns have already won a place in this community and with this celebration, it has been reaffirmed by all, and the inauguration of the monastery has yet to take place on August 4th!

We have 270 guests online