Sit down and take a moment...

Last night we received a call that the Dalai Lama would come to the monastery at Basgo.

Last Sunday an earlier visit was planned but as the security personnel was not informed in advance the procession drove past.

We heard the Geshe (teacher) of the monastery let the security people know about us. First we had to show that our cameras really could take pictures and were not secret weapons, then Aniek and I were allowed in the temple. The people outside were also checked for weapons with a portable walk thru scanning gate. It took a long time before the procession arrived.. the nuns faces lit up: the first visit of His Holiness to a nunnery in Ladakh! History will be made!

The Dalai Lama came in, sat down and Dechen, the abbess gave him the objectives of this monastery. Which he carefully read. Then he gave a short lecture on the importance of education to nuns. He said unfortunately he was not the one who decides whether the nuns were allowed to get the full ordination (to bikhuni), but now that they could study for Geshe-ma (professor of Buddhist philosophy) encouraged them to work hard to achieve that.

It was so touching, the Gephel nuns have invited him five times by personally going to Dharamsala and also to his office here, and finally he was here sitting on a chair in their temporary temple! 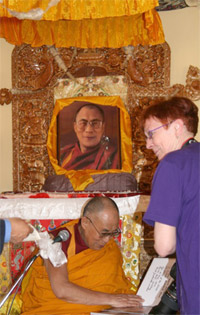 At one time the secretary of the Dalai Lama said that I could offer the book about his visit to the Netherlands. I was just so surprised that I tripped over the rug.

He took the book, began to scroll through the pictures and when he saw one of himself with Erica Terpstra, began narrating joyfully the events at Ahoy to everyone:

'That is my old friend in Holland, I always joke with her about her weight..' and with the pictures of Paula de Wys, he said: 'she lives on a boat, I will go there the next time I go back to Holland!'

Towards the end of the visit the secretary summoned me to take a group photo of the Dalai Lama with all the nuns, after that he took the camera out of my hand saying:

'you sit there..' and gave the camera to a monk to take pictures. Then the villagers were allowed to join him for pictures, which went on endlessly .. 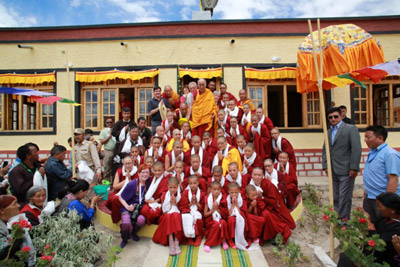 These nuns as women have shown to the whole village they can achieve anything by their accomplishment of the Dalai Lama’s visit to their unfinished monastery.

As I mentioned in my ending note last time: have no expectations and something beautiful and unexpected will be thrown at you.

We have 368 guests online