Ladakh, birthday of the Dalai Lama

Today 6 July, is the Dalai Lama’s birthday and falls during the 33rd Kalachakra. This morning I was up early, at 8 am we got a taxi and arrived just in time before his birthday speeches began.

In the press section were many local colleagues some with expensive cameras, and some with tiny ones, that looked comical. I could not understand a word of most congratulatory speeches, as it was said in both Tibetan and Ladakhi . Occasionally, the Dalai Lama said something in English. Then suddenly Richard Gere was standing at the pulpit. The funny thing is that not one among the mass of 150,000 local people had a clue of who Richard Gere is, let alone know he has been in contact with the Dalai Lama for 33 years. It produced a few nice pictures and of course a nice speech from him, which was focused mainly to the 'foreigners' in the audience.

Eventually it was the turn of the Dalai Lama himself... but before he could say a word, we heard screams from the audience. Then a woman ran up to the podium apparently everyone knew what was going on: she was possessed by a spirit and ran to the Dalai Lama for redemption. 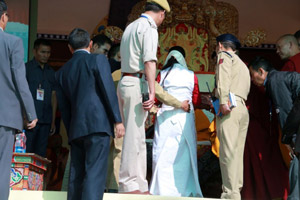 She was taken to the Dalai Lama with the help of both the security guards and a few of his soldiers, the woman cried for a while, fell to the ground, and then stood up again. The Dalai Lama put his hand on her and then she lost consciousness and was lovingly carried away by six pairs of hands. Ten minutes later a man with the same symptoms ran towards the stage accompanied by loud chanting, he too came near the Dalai Lama to be healed and then fell unconscious.

What I really came for, were the nuns. So I left the press section and searched the area for the nuns. What happened there was really unexpected and heartwarming. I had no idea that I knew so many nuns! I heard calls from the group 'Marlies' or 'sister', waving hands, smiling faces, they made space for me to sit .... now I felt at home again, this is what I wanted to reflect in the picture .... Nuns in Dharamsala, from Kopan in Nepal, from all areas praying together as one… We have 144 guests online