At the sight of the nuns in Nyerma end of April, saw all the nuns are healthy. Thanks to the insight that hoofdnon Dechen good nutrition is important, especially for the elderly in the harsh climate of Ladakh. Fortunately there thanks to the income of the guesthouse in the first season for money.

Early in the season has already begun work to extend the vegetable garden and the construction of a Greenhouse. 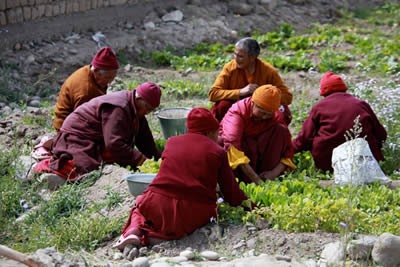 More significantly, the work to all parts of the monastery together. The nuns are now in the winter from one space to another without running to be snowed under or by having to walk the walk. There is a room built for a teacher who comes once young nuns to live in the monastery.
It was wonderful to see how each in its own way, literally a stone contributed to the construction: all together we lugged bricks needed for leveling the ground. Old nuns who sat difficulty walking and made piles of stones by those who have difficulty walking had been moved.

In November 2008 the participants of energy company Essent to the Seven Hills Run in Nijmegen over  10,000 for each run. The money is earmarked for a solar energy project for the monastery and guesthouse in Nyerma. Early in the season we started to shop around and inquire about the most reputable company and the best system. This type of process takes place in Ladakh and less efficient than in Europe. Initially it seemed feasible that the installation of the panels and associated batteries before the end of the summer would be installed. Unfortunately this was too high. Now we hope that it is ready for the winter so the nuns can benefit from it during the long dark days. 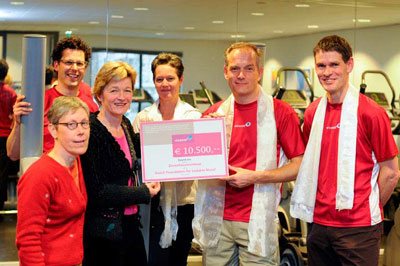 The summer of 2009 was the second season of "Home Stay with the nuns Tara's. Last summer we were all excited about the number of guests and income, this summer was three times as much! ( 3,500.00!) In May and June were quiet with some peaks here and there. July, August and September were very busy. Guests including the Netherlands, Germany, Belgium, Switzerland, England, Sweden and USA were uncommon one night in transit, sometimes three weeks for meditation. They enjoyed the impressive surroundings, the tranquility, the nuns and the good care and delicious meals of the volunteers.
For the volunteers it was hard work with so many guests in the house. In Nyerma is physically hard work: there is not always electricity, water must be pumped to the kitchen, cleaning and laundry are big jobs. The climate is making life and work harder than in Europe.
Be the first volunteer came in late May Ellen. A veteran of last years that was willing to fill gaps and new volunteers to work. With Dechen and Chamba, two nuns who are involved in the project, she could quickly pick up the thread.
Angela came in June to run the guesthouse. That week came the first "big" group this year.
Early July, Els and Kris from Belgium to take over. They are constantly in the weather. Through her knowledge to work as a physiotherapist and massage to offer guests an extra Els did bring in money. Even nuns complaints came for treatment.

In late July there was a time when almost all of last year there were volunteers. That says enough about the attraction of Ladakh and especially Nyerma. Along with all the nuns we had a day out to Stakna. We visited the temple and then a picnic. Everyone enjoyed!
Gijs names beginning in August and Lotte over. The months of August and September were just as busy the month of July, no day without guests and often full occupation. This is going shopping and cooking a tough job. Messages must all be met in Leh. That is only two hours by bus up and down. And since these amounts are significant, it is also quite tote.
Lotte and Gijs remained until late September when the guesthouse closed. Everything is cleaned and stored for the winter and is ready for next summer hopefully just as successful.

Whole is very special to see how Chamba and Dechen develop and learn to deal with westerners and think about the state of affairs surrounding the guest house. For them, the weather is now getting used to the calm has returned after departure of guests and volunteers, as it is for us to get used again in the Netherlands. 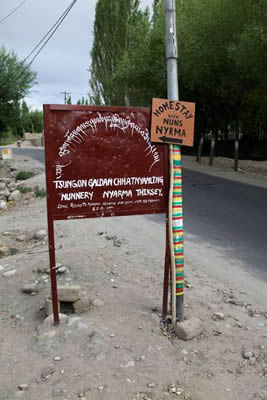 We have 203 guests online