Directors will visit to Ladakh

In July 2003, the Board of DFLN been on a working visit in Ladakh. Accompanied by a sum of  1000.00 we arrived at the office of the Ladakh Nuns Association. Dr.. Tsering Palmo and her staff we are in the nearly five weeks of our stay DFLN consider the task itself might take in particular the projects of the LNA support.

The first week we attended the "Boddhicitta teaching 'of the Dalai Lama. In the second week, the workshop 'leadership' position. In the morning hours gave Bea Bosch, a former lecturer at the dental hygienists trained at the Amsterdam ACTA, explaining the prevention of dental problems. Thereafter, Bea Bosch, Marlies Bosch and Jan Willis, a workshop on women and leadership, which twenty nuns from various monasteries in Ladakh participated. The nuns were very enthusiastic. 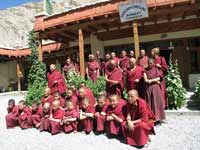 After the workshop visited the board a group of nuns and a number of convents in every corner of Ladakh. It was an experience which showed the conditions under which the nuns often have to live. It was clear what exactly the status of nuns in Ladakh. From conversations with Rhinpoche Bakula, who received us for an audience, and the president of the Ladakh Buddhist Association, showed that two hundred years ago the young nuns permission was given for nuns clothing, while only the lay vows. It was intended that the nuns at a later date would make the monastic vows, which did not happen. It can not seem to see it or not or nuns devoted, with the result that their status has no respect and it seemed the people not be taken seriously.

There is now, thanks to the efforts of Dr. Tsering Palmo, slowly changing. Nuns to study, make vows, and in Phandeling monastery in the Mahabodhi complex even six women in Taiwan have received full ordination. Especially the older nuns, mostly illiterate and, until recently employed by monks or villagers are active managers for doing all kinds of heavy jobs, such as editing or country roads are a bad way.

During the visit, our goal thus gradually becoming clearer. We visited the famous Thiksey monastery, where only recently a fresh wind blowing, there is a Rhinpoche a beautiful piece of land in an ancient place where Zangpo Rhinpoche ten centuries ago famous stupas built disposal engaged to a convent for nuns to build. A place where water is, where a serene silence reigns, is the monastery on that spot, especially for the 27 elderly nuns (45-87), which in future is also room for young growth. The nuns have for the first time in their lives reading and schrijfles, they are taught in the teachings (Dharma) and have time for prayer and meditation. There goes the DFLN her shoulders up.

A place for older women who have worked hard all their lives! You can end in three ways:

Finally, there has been an administrative change. Bea Bosch has retired as treasurer. Annette Hollyhock (doctor), initially an advisory member, is now part of the board and Myra de Rooy. Myra de Rooy, the book Women of Buddha Mountain among others about the life of nuns in Ladakh, which included an interview with Dr. Tsering Palmo.

We have 139 guests online