Years ago was a thriving contact the campsite "les Matherons' in southern France, run by Henk Knol and Ada.

Les Matherons is a camp in the French Alpes de Haute Provence in southeast France near the town Puimichel. Henk and Ada Knol, the owners of the site, people want a holiday experience surrounded by calm, with space for reflection and choices for a number of activities.

There are some courses in May and tai chi mandala drawing and in high season mandala drawing, zen meditation and meditative archery and possibly making tsa-tsa (small reliefs of Buddha in various forms).

Ada and Henk Knol read in a 2005 article in the magazine Form and Void on a project for elderly nuns in Ladakh, which attracted them. They then for the first time the tip money ( 1000.00) from the summer to the foundation paid. The proceeds from the donation box was never  1000, - per year raised. With that "little" money in Asia, for example, you can do much more than in the West.
In addition, they decided to sponsor two nuns, because they know they thus support an entire community. Their motivation here is that women still in many parts of the world's disadvantaged, unfortunately also in the Buddhist Sangha.

In addition, they have a personal interest. They believe that the Sangha in the coming decades, a much more important role will (should) play to help us to find our happiness. When she heard about the nuns, who despite their circumstances nevertheless choose to Dharma study and live, the decision taken to support. 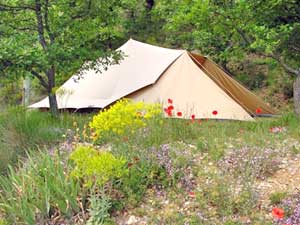 The campsite is situated in the Alpes de Haute Provence (south-eastern France) near the village Puimichel and is open from April 20 to October 1.
Address: 04700 Les Matherons Puimichel France.

We have 146 guests online